The Fourth Trimester is a theory about child (and parent!) development in the first three months after birth.

You have three three-month trimesters during your pregnancy, hence the name “The Fourth Trimester” for the first three months after birth.

Babies have very specific needs during their first three months of life. Very simply, of course, they need food, warmth, shelter, and to be kept clean. We know all that, but other things come as a complete surprise when we are suddenly faced with a small human to care for – e.g. the fact that they aren’t happy unless in bodily contact with a person, preferably you, the mum. 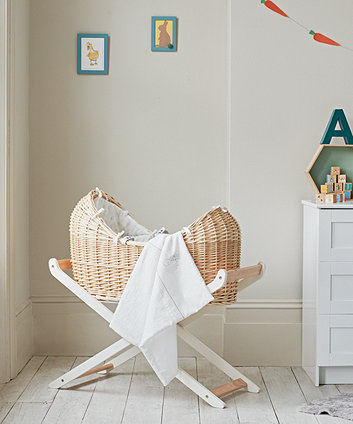 You’ve bought a beautiful moses basket or cot, you’ve got them off to sleep after a feed nicely, but just as you go to put them down they’re having none of it; they immediately wake and become fretful.

The trouble is, you’re desperate for them to sleep in the cot or basket, because you’re dying for a kip yourself. Or a wee. Or a sandwich. And you haven’t washed your hair in a week and really want a shower.

The first day I was completely alone with my newborn I barely moved, because she would get upset every time I tried to do anything. By the time my husband came home I’d was ravenous, having only eaten the six remaining digestive biscuits in the packet I could reach from the sofa, and was desperate for a wee!

It’s fine if you’ve got visitors, there are very few people in this world who aren’t delighted to let a tiny baby snuggle to sleep on them, and one warm tummy with a heartbeat is much like any other. But if you’re on your own it becomes a bit more tricky. And then you start to wonder what it is you’re doing wrong; “Why won’t my baby sleep!?!” is a common concern.

The trouble is as much about our expectations of parenthood as it is about the job itself. We’ve come to expect, through films and magazines and glossy advertisements, that babies will lie down and have hours of blissful angelic slumber. They don’t. Well, a few of them do, but they’re the exception, not the rule, and that a baby doesn’t want to be put down is not our ‘fault’ at all, but actually good evolutionary sense – babies in their mother’s arms are much less likely to be eaten by wolves or other predators than babies who are happy to be left alone!

This is where the theory of the Fourth Trimester comes in. It suggests that we should think of the first three months after birth as a continuation of the pregnancy. After all, the baby is pretty much as helpless and dependent as it was in utero, and it was pretty happy and comfy in there: If we can keep conditions similar to how they were in utero, the baby is more likely to be content, until it becomes a little older and more aware of its surroundings and ready to take the world on on its own terms.

So, What Does This Mean In Practice?

If you think about where your baby is showing signs of discomfort – e.g. when put down in a cot or a pram, think about how life would have been like in the womb and try your best to replicate it.

Firstly, they were permanently warm and snuggly, and there wasn’t a lot of space. While they’re led on you, this is pretty similar, but if you’re trying to put them down into a cot or crib, the sheets or cover will be cooler, and they won’t feel that confined feeling that makes them feel secure.

You could try warming the place you’re going to put them gently with a warm hot water bottle to bring it up to skin temperature (not hot) before transferring them, or try swaddling (see here for information on how to do this safely https://www.nct.org.uk/parenting/how-do-i-swaddle-my-baby).

Or you could try babywearing (https://www.nct.org.uk/baby-toddler/everyday-care/everything-you-need-know-about-slings-and-carriers) which keeps the baby with you while you go about doing what you need to. The moving and jiggling they experience while being carried, far from keeping them awake, is soothing and reassuring, and you’ve got the benefit of having your hands free to get on with stuff.

Then there’s the issue of external stimuli, i.e. light and noise. Inside you, noises were muffled, it was dark, and the one constant was the swooshing and thumping of your breathing and heart beating.

So similarly, babies respond well to darkened environments, low frequency sound, and especially repetitive sound, like dishwashers, vacuum cleaners, washing machines and the like. Chances are, it’s far too quiet when you’re trying to get them to have a nap in the daytime! If you’re not  There are plenty of free ‘white noise’ apps you can download to your phone (White Noise Free for iPhone, White Noise Baby for Android) or just download a white noise mp3 and play it on a loop. I was amazed at the difference when we tried white noise with our ‘won’t be put down’ baby.

Of course, manufacturers aren’t slow on the uptake, there are all manner of amazing contraptions to soothe your baby using this theory. Like this, the 4Moms MamaRoo Bouncer!

Oh my God! Is there anything it doesn’t do!? Well, make a cup of tea for you while it keeps baby happy. Now THAT would be handy.

But if you’re not willing (or able!) to shell out a small fortune on the ultimate ‘bluetooth enabled’ mp3playing, mummymotion imitating swing, there’s always the option of taking them out for a drive in the car; that is generally guaranteed to have the same effect. Except for those times they wake up as soon as you pull back in front of your house, so you still won’t get that shower!

But, when all’s said and done, your brain may be scrambled, your body clock will most likely be seriously out of kilter, your boobs will feel strange, you’ll find that leaving the house requires military-style planning, and you’ll come to appreciate that ‘baby brain’ really is a thing, the first three months are a precious time with your newborn. Try your best to get some rest. I hope some of these tips help. And if they don’t, don’t worry, you’ll muddle through. It’s not forever. It’s just a phase. And one benefit of sleep deprivation is that your memory of this period will most certainly fade!